The Saga of the New Guitar Top

In 1966 I bought a used Gibson D50 guitar.  I didn’t understand at the time that it was far superior to my very modest musical abilities.  At the time I was sharing an apartment with an old high school friend who was a much superior musician and at one point I had borrowed some money from him which I couldn’t repay.  I offered to pay him back with the Gibson and he agreed.

Fast forward 22 years and we were still good friends but he had cancer and was dying.  When I visited him in the hospital shortly before he died, he said to me that he wanted me to have the guitar back, and at his memorial celebration his family handed it to me.

Larry was a gifted musician but not very careful with his possessions and it appears that the guitar led a fairly rough life, as will be evident in these photos.  Clearly there were several attempts at repairs, especially replacing the original Gibson adjustable bridge and what appears to have been several not very successful attempts to glue (and at one point bolt) down replacement bridges.

Finally it became unplayable and I took it to a luthier, Cat Fox, of Sound Guitar Repair in South Hero, VT who helped me realize that the top was so ‘belleyd’ and there was precious little top wood left to yet again glue the bridge to.  It was obvious that the only way to repair the guitar was to put on an entire new top.  Since getting it back from Larry, I had come to appreciate what a fine instrument it was, so I decided to go ahead with the repair.  Here are a series or photos, courtesy of Cat Fox, of that process.  They have given me a new appreciation of the skill and complexity of such a job. 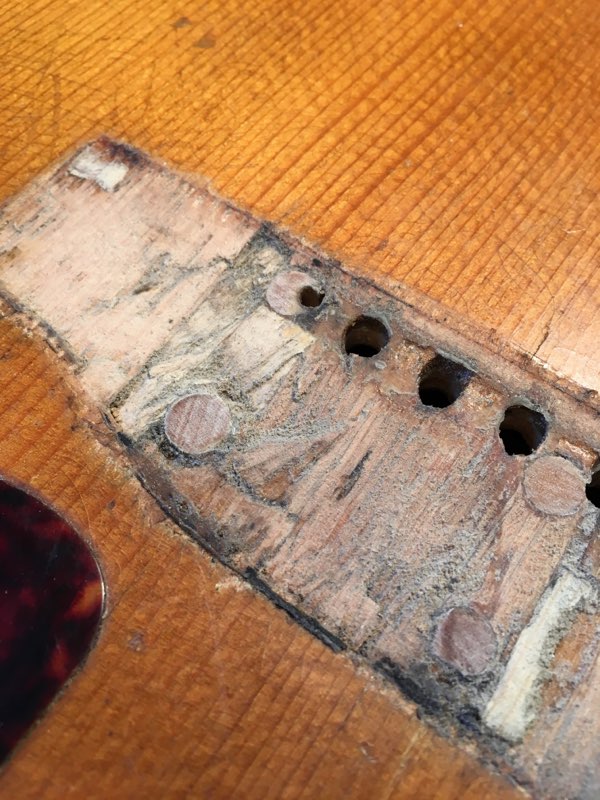 Not much wood remained to glue a bridge to. 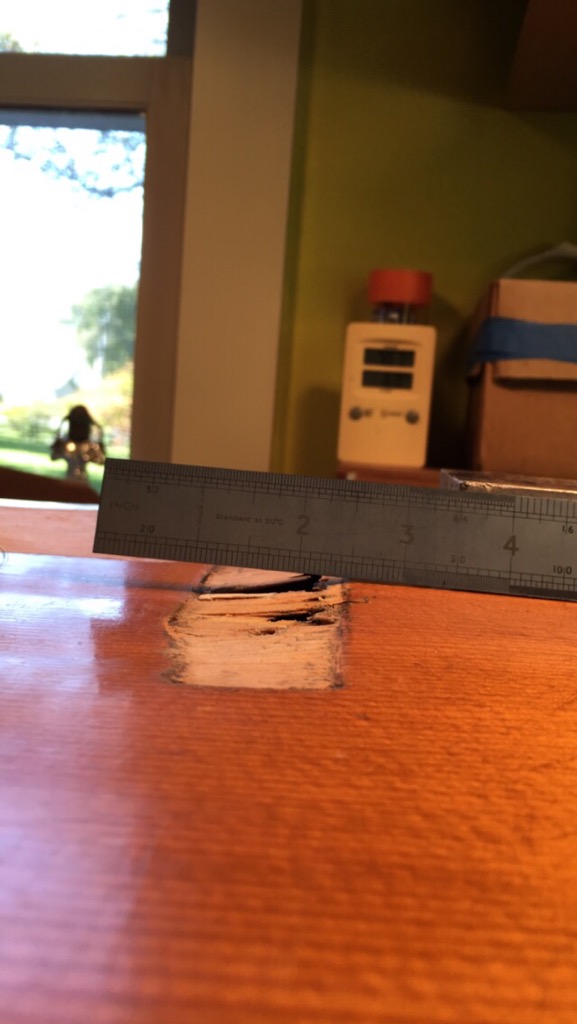 And the top was badly ‘bellyd’. 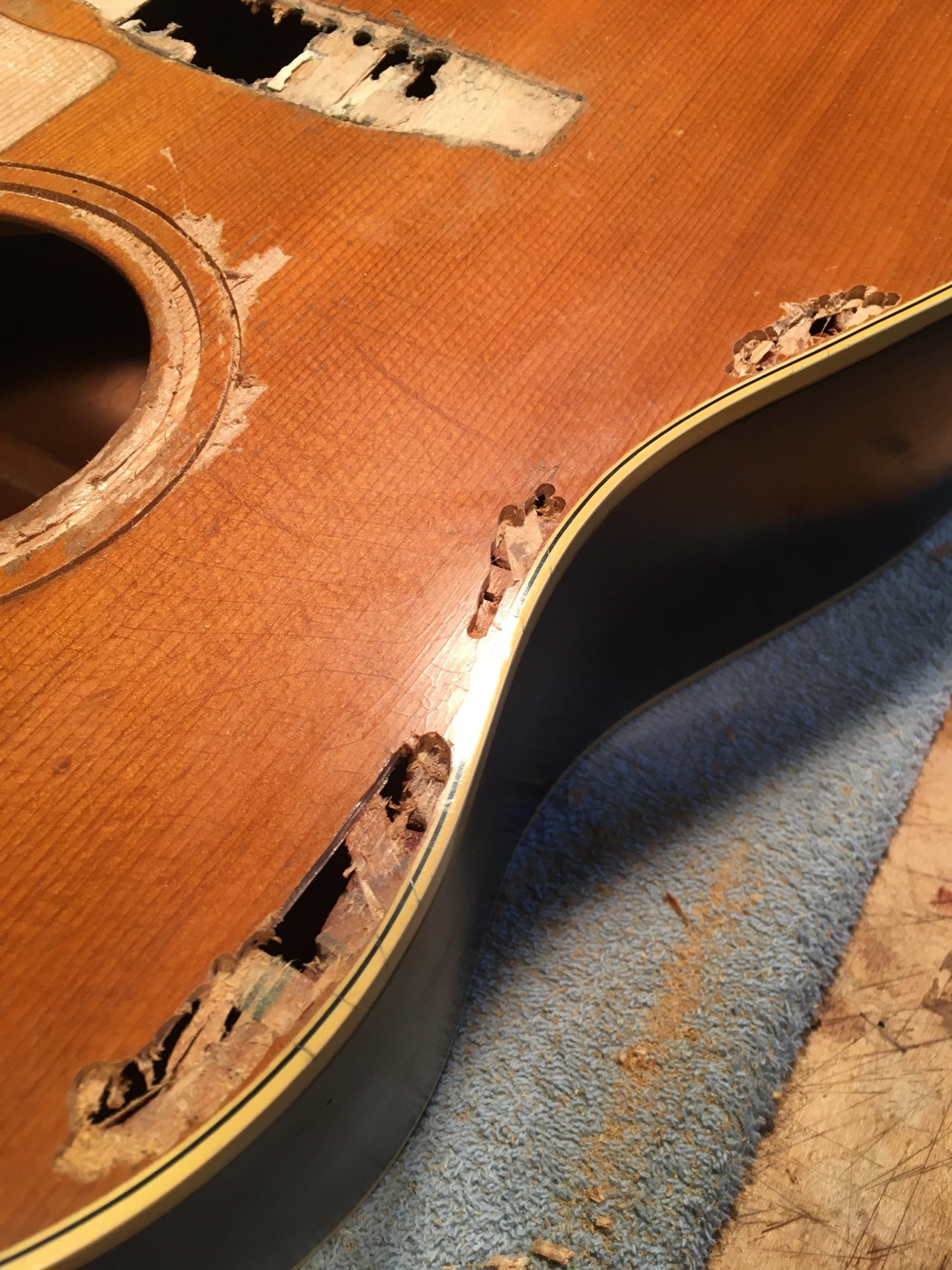 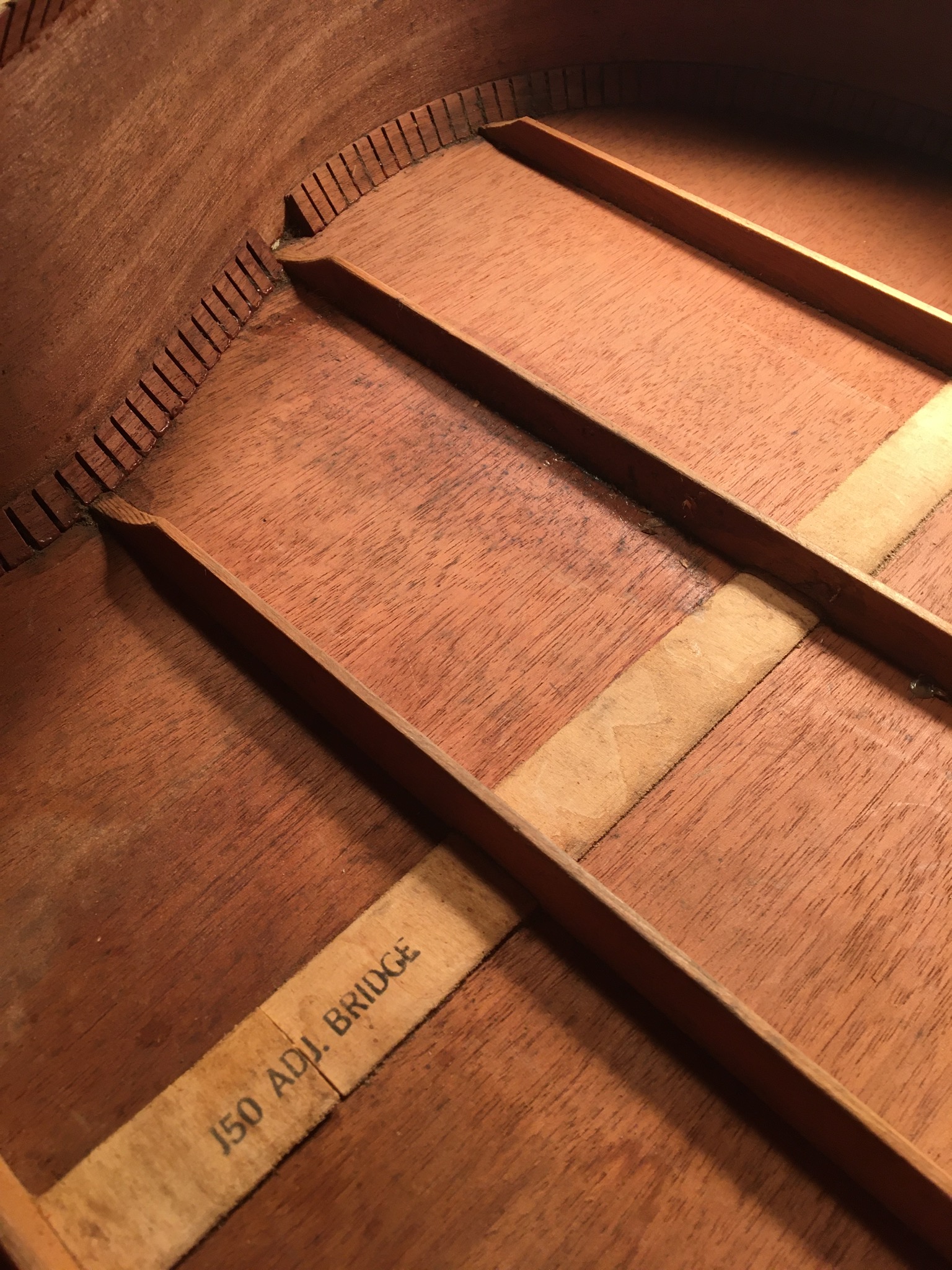 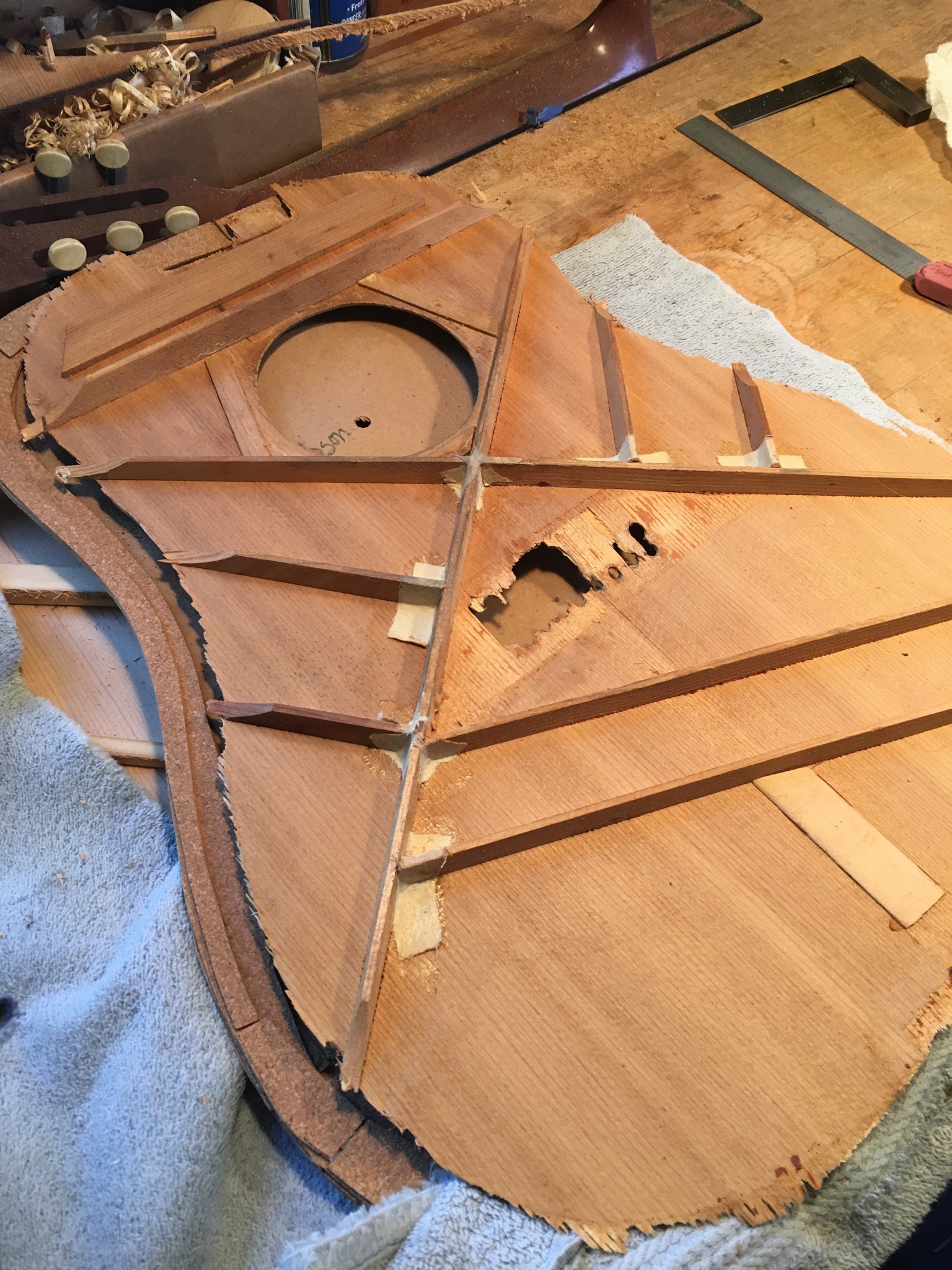 Evidence of many past repair attempts. 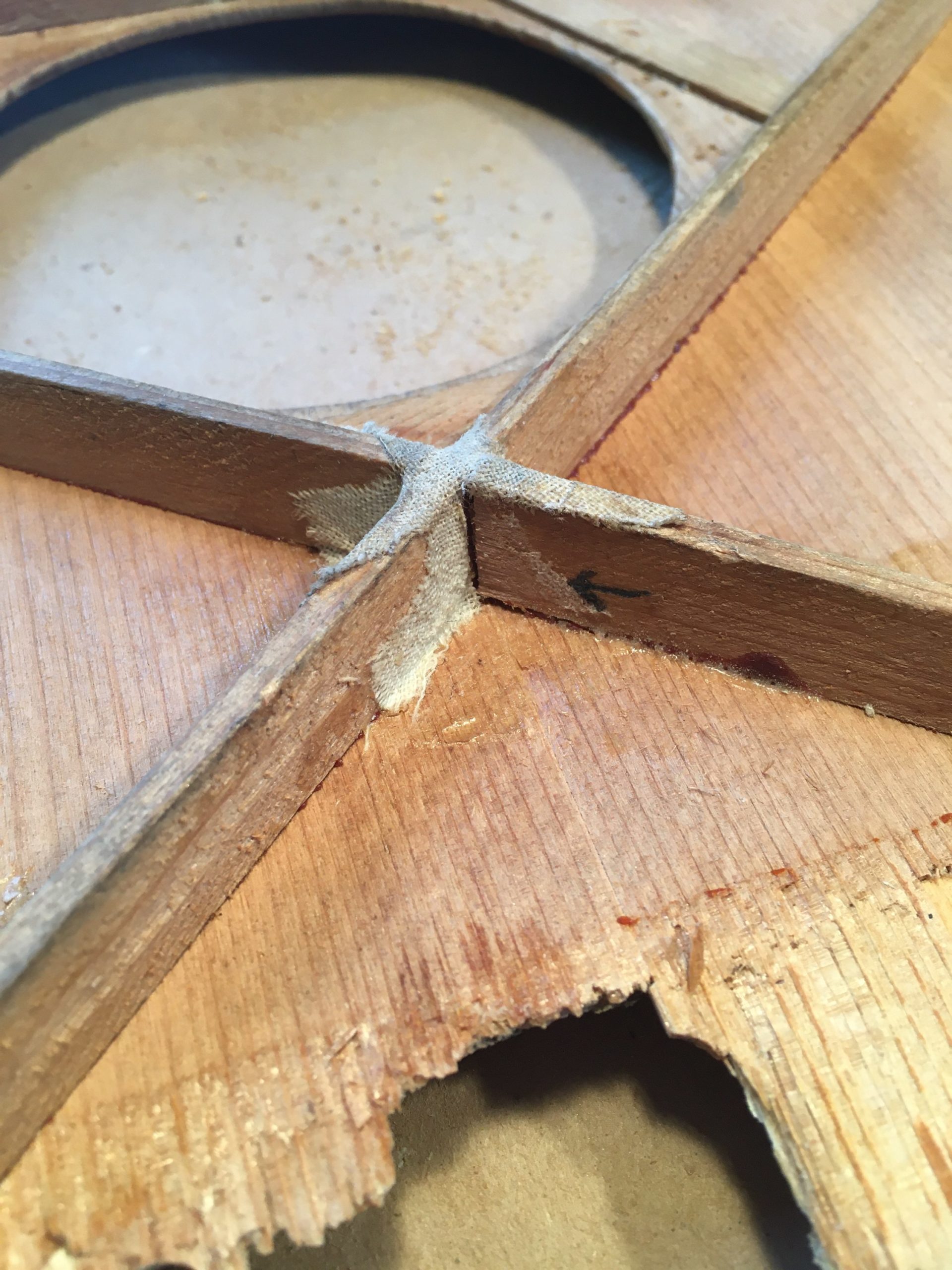 One cause of top failure; a broken X brace. 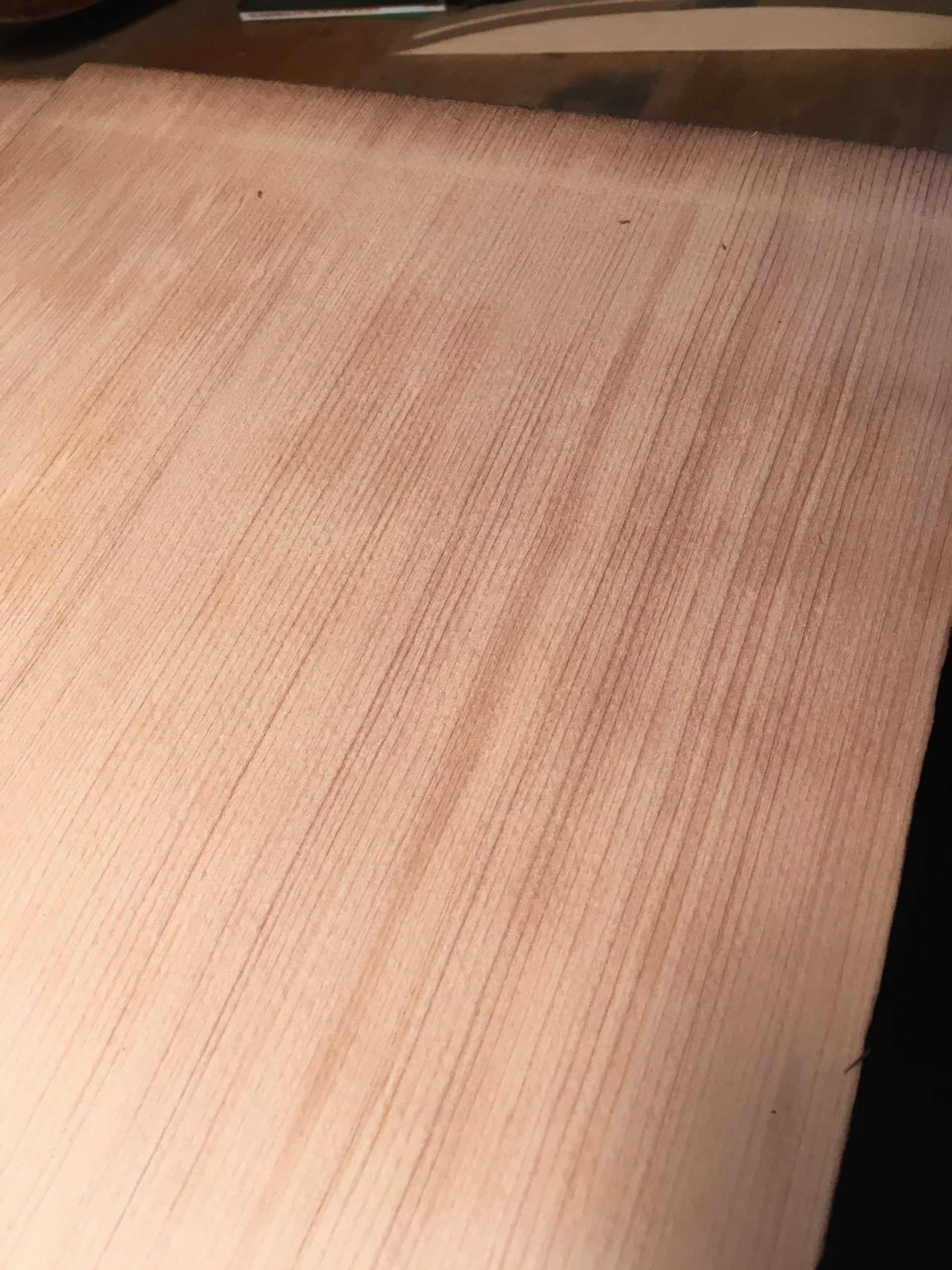 A lovely piece of raw spruce for the new top. 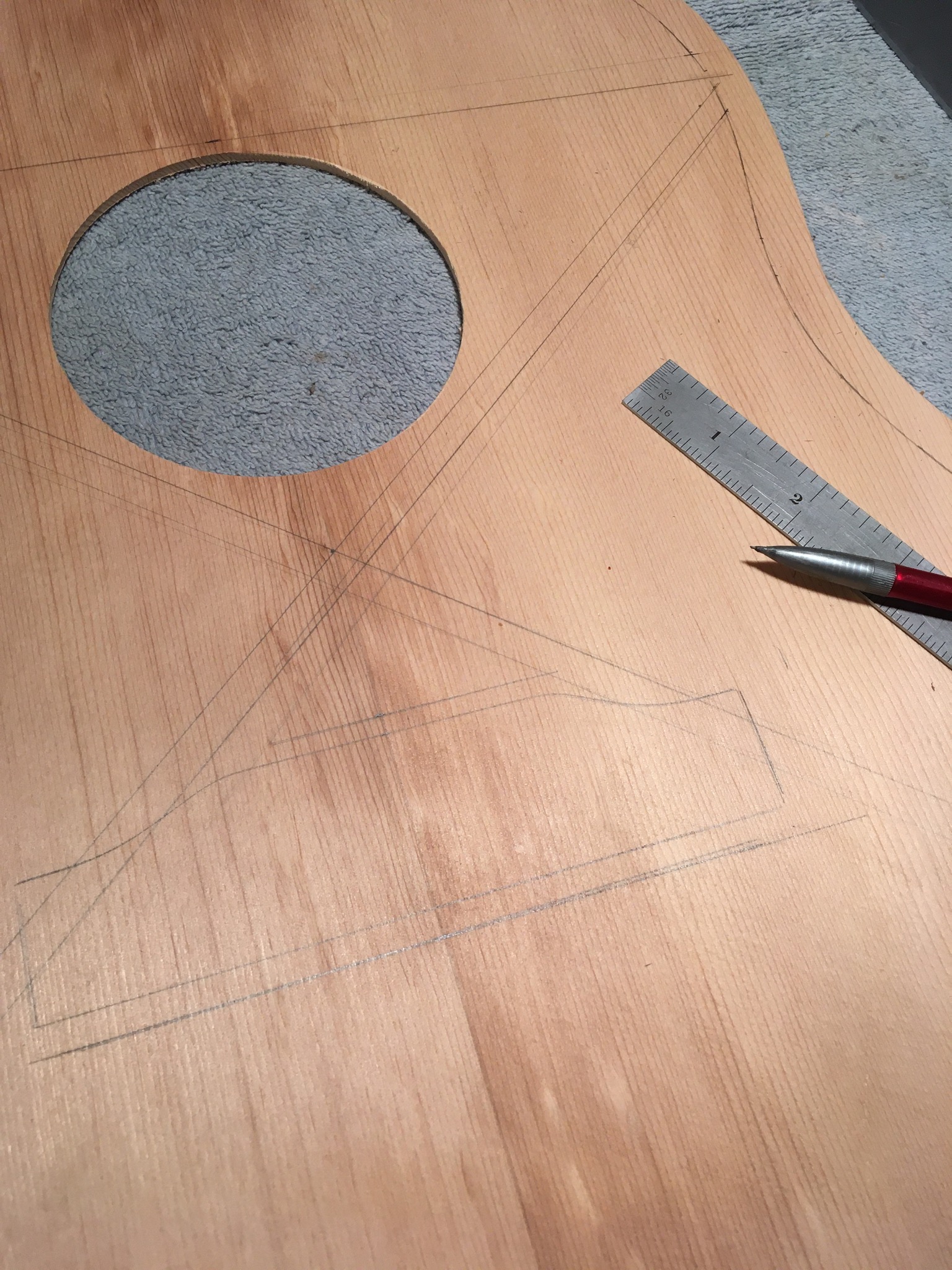 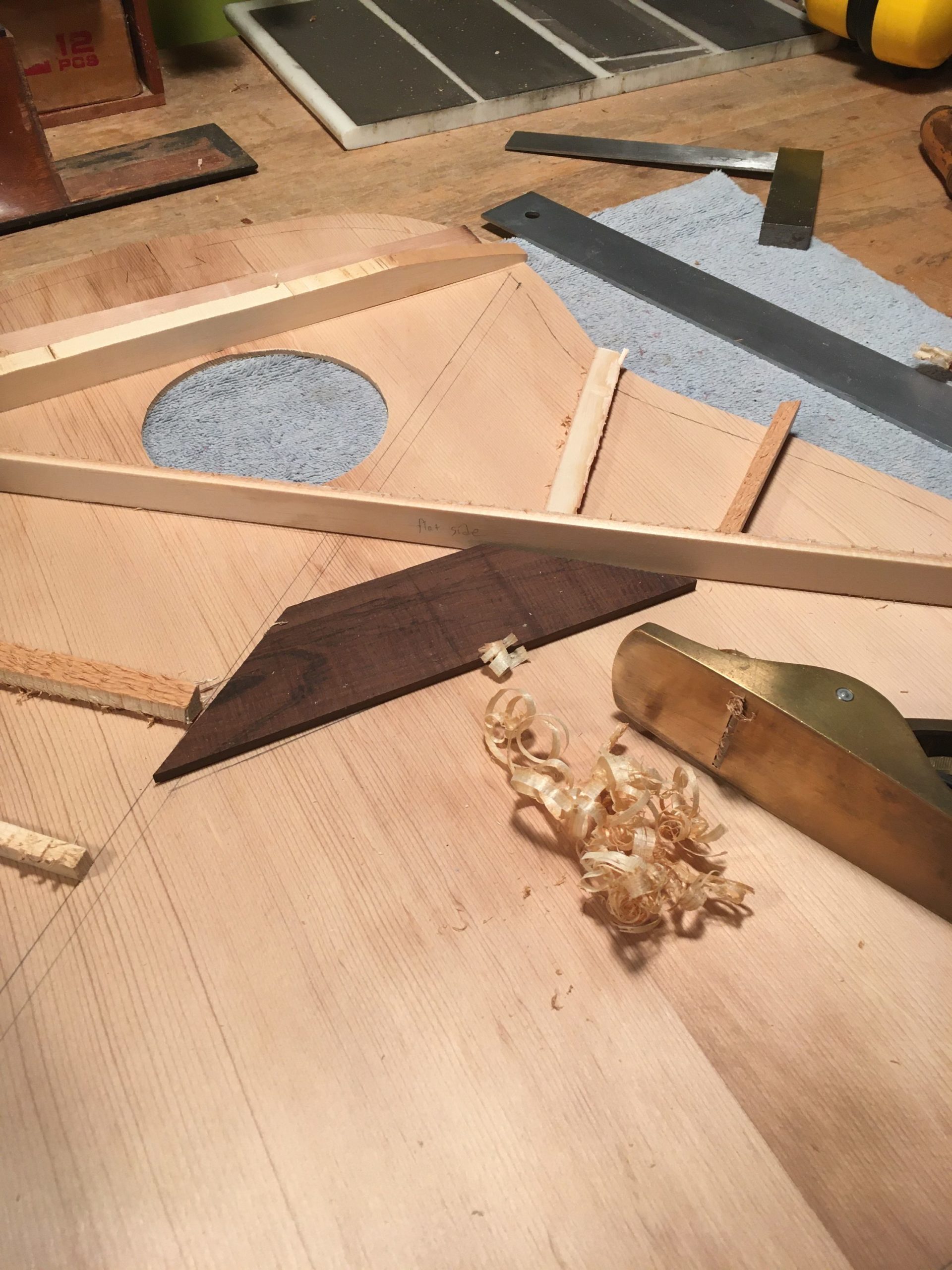 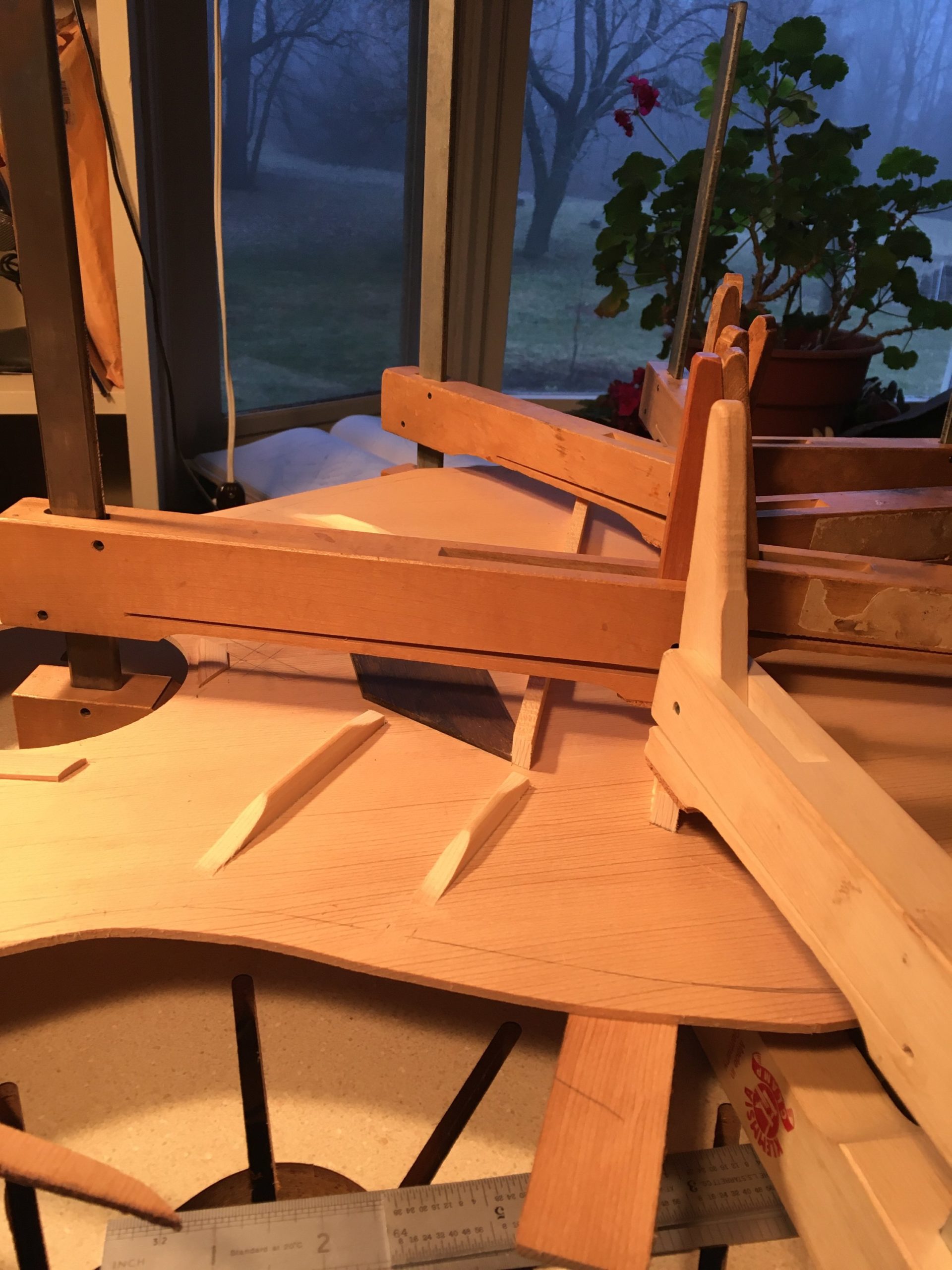 Gluing down the arched braces. 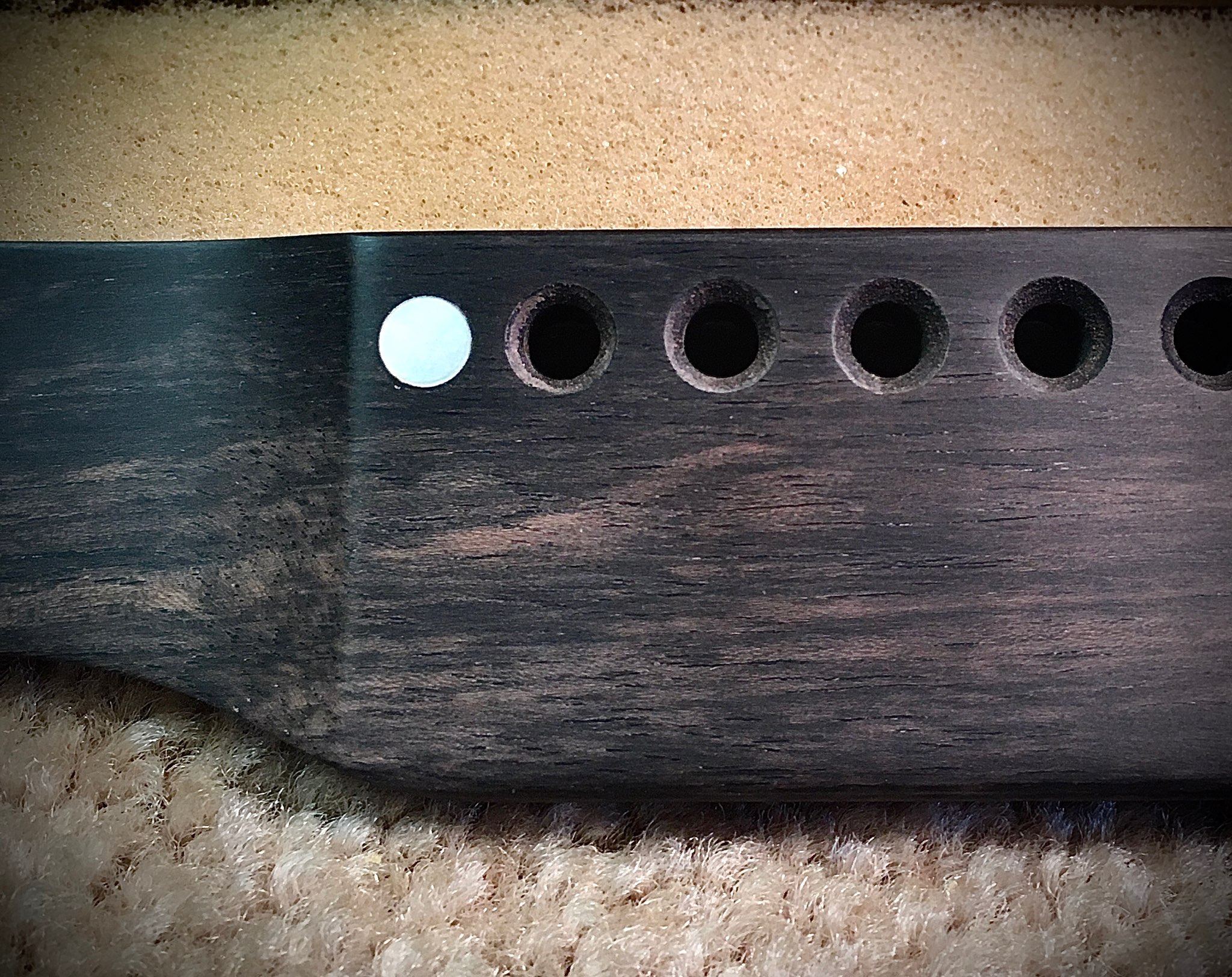 Cat says the Loch Ness Monster lives in my new bridge.  Sounds like a tune title, “Nessie on the New Bridge”. 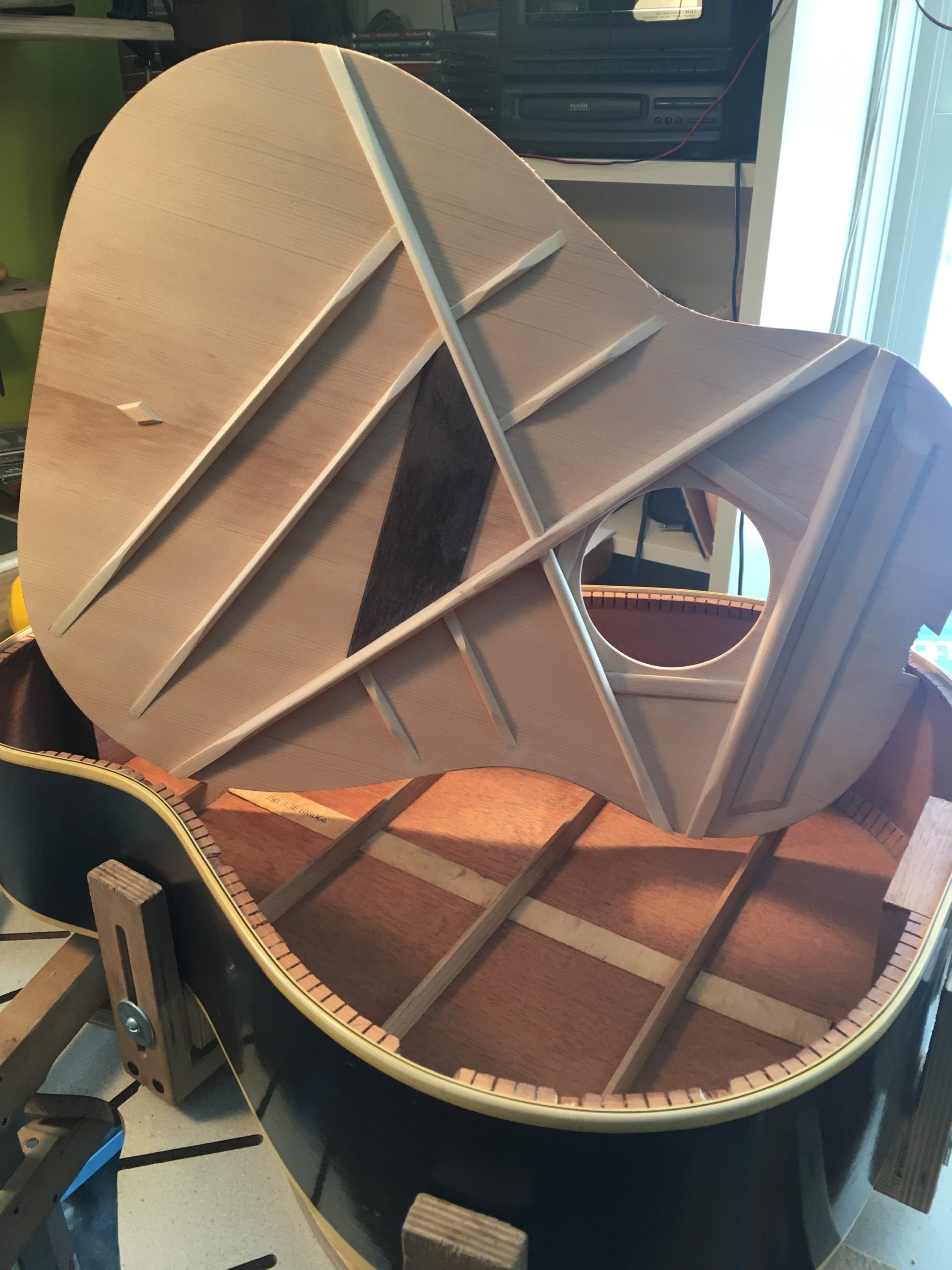 The new top, ready for fitting. 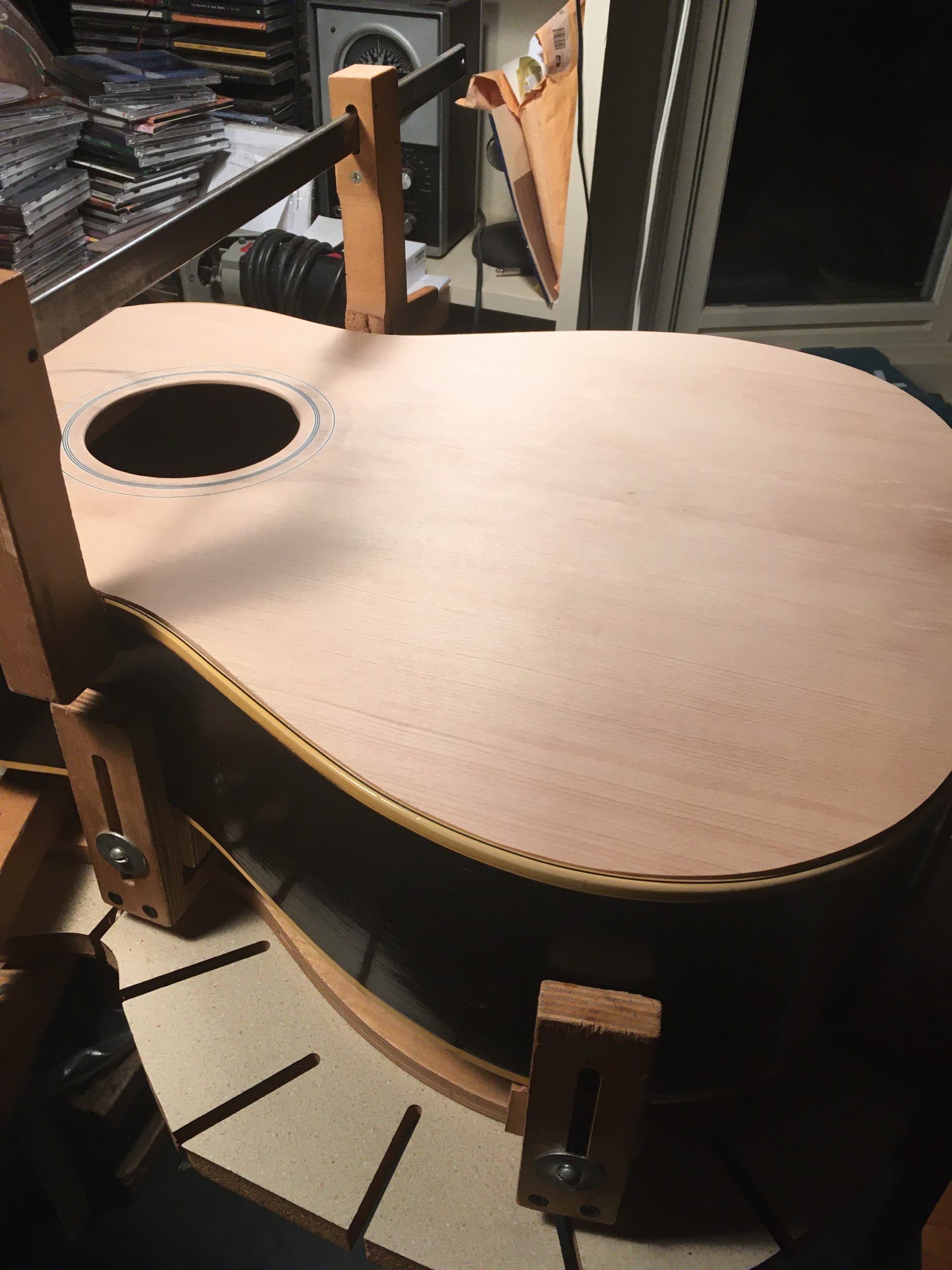 Fit and ready for gluing. 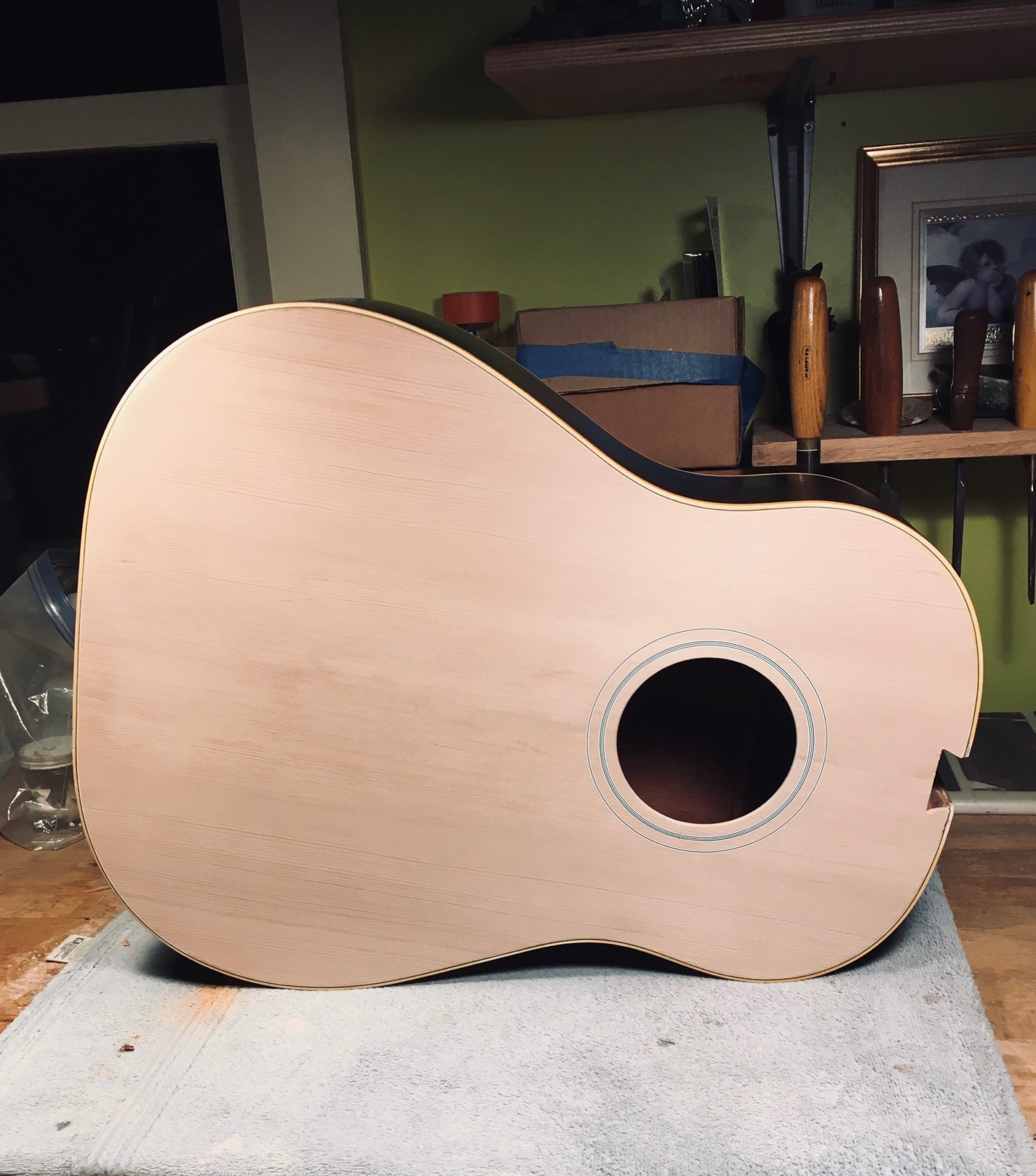 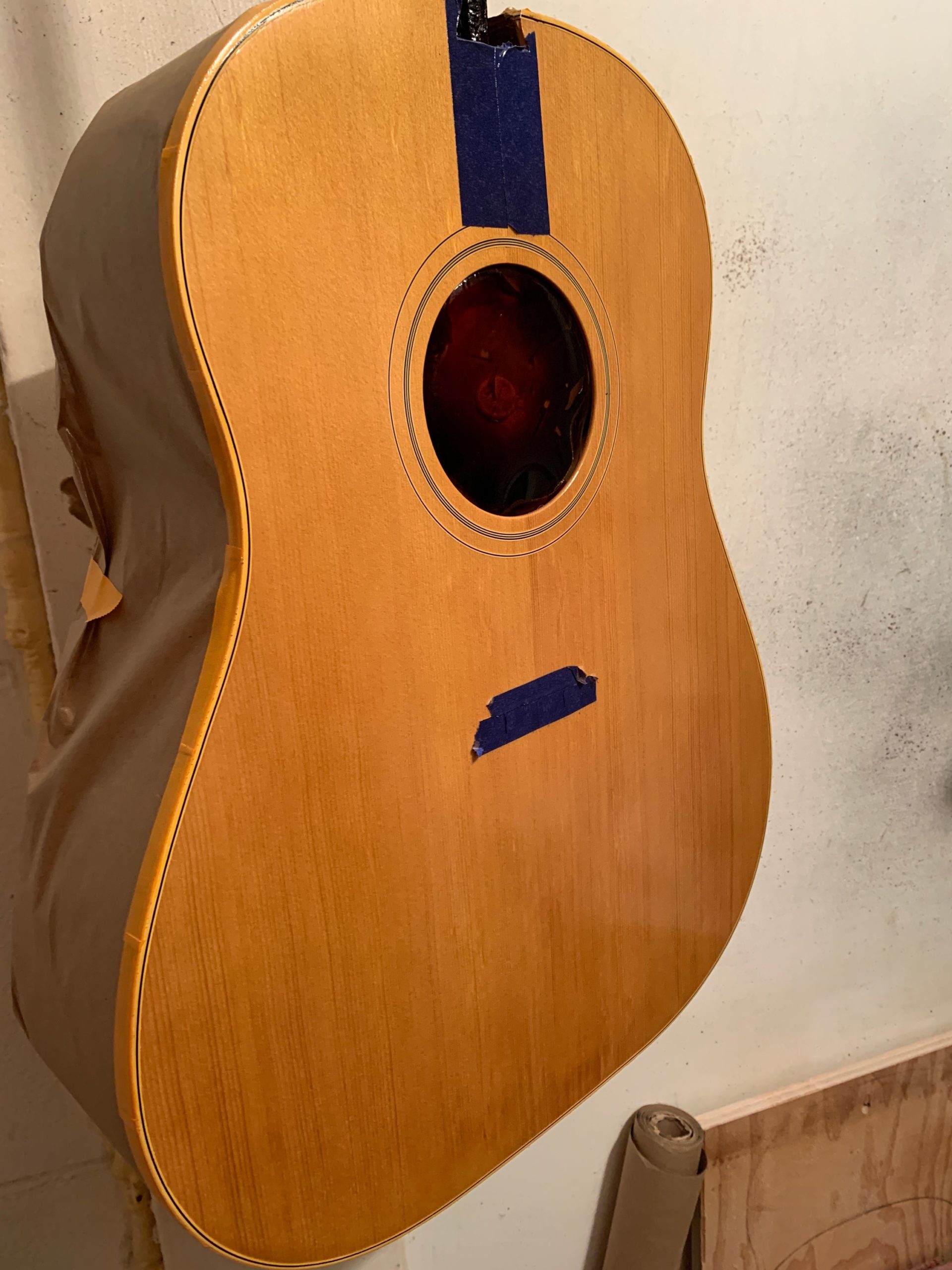 The first few coats of nitro cellulose finish including a tint to approximate the color of the old top,  More clear coats yet to come.  Each coat takes a while to cure. 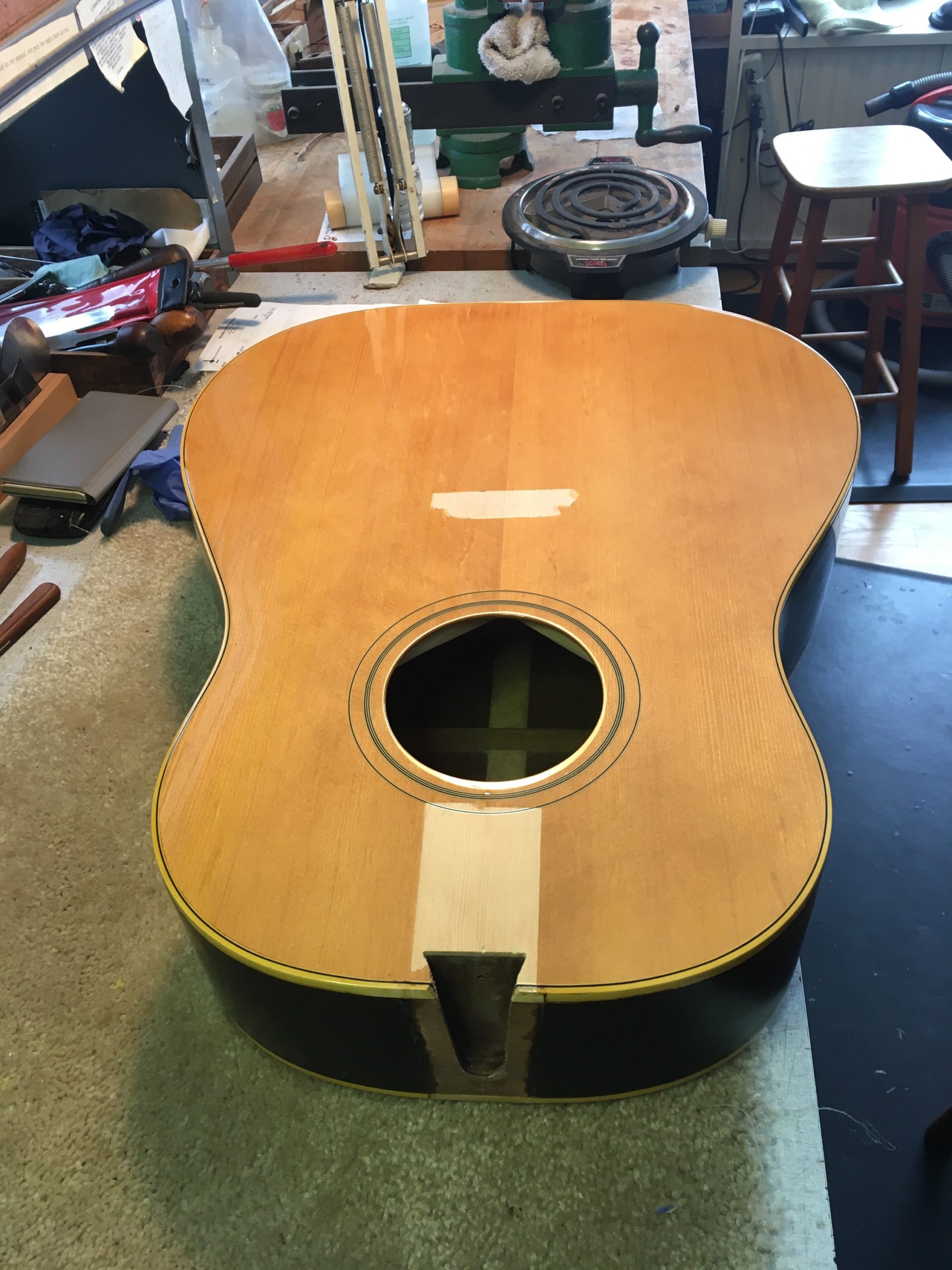 (February 27) The guitar body finished and ready for reassembly. 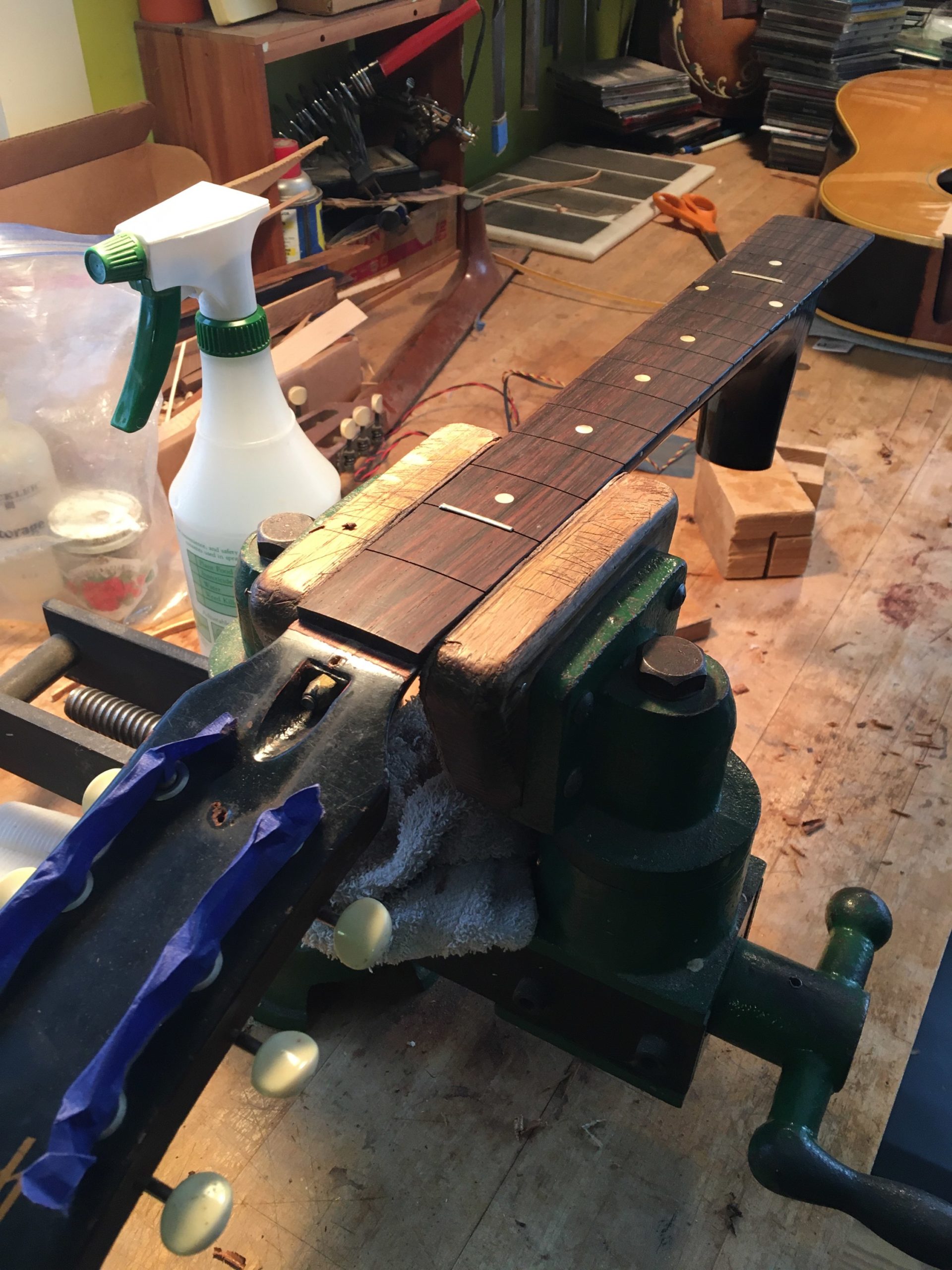 The neck and fingerboard ready for new frets. 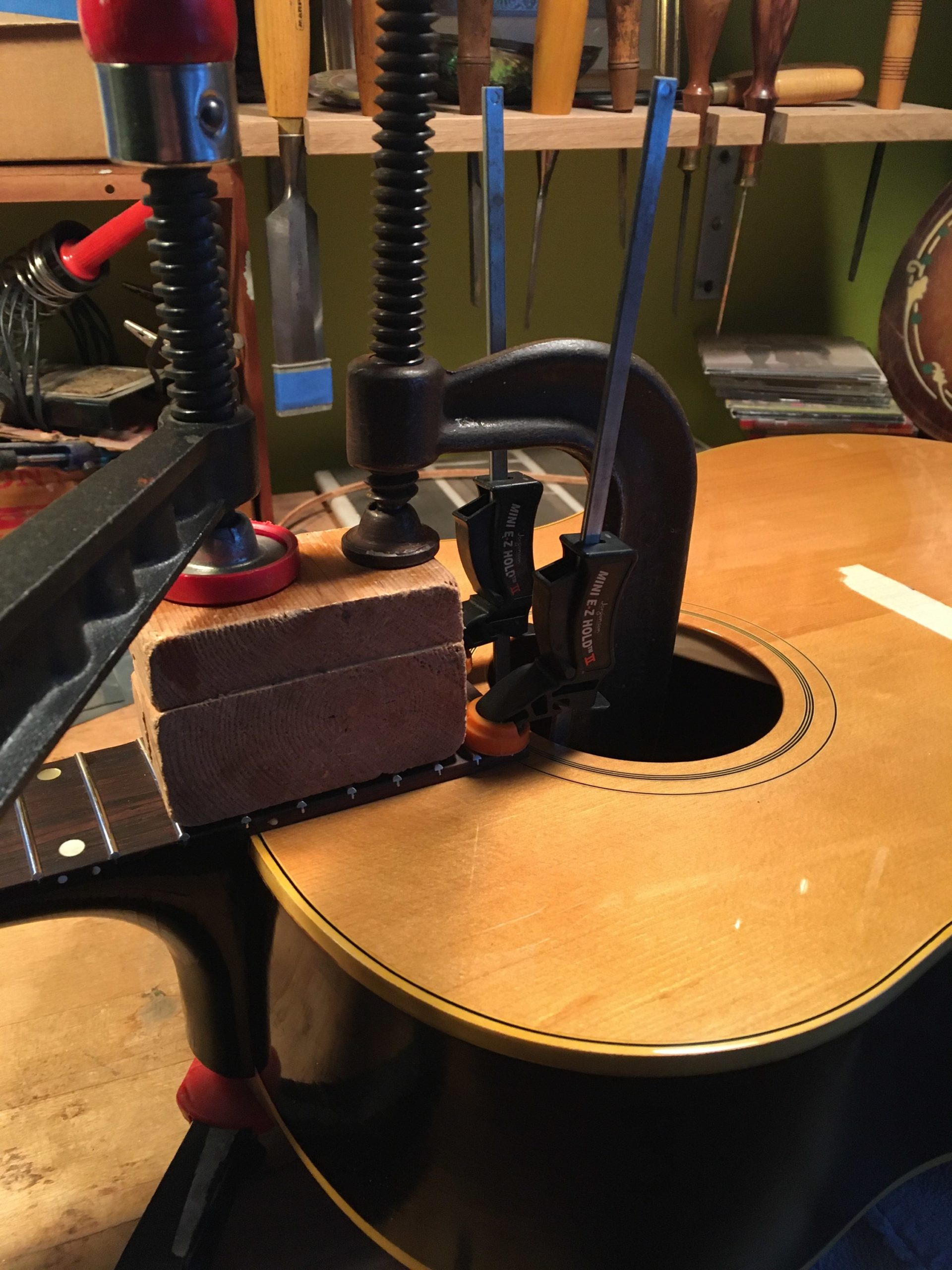 Reattaching and resetting the neck.  This is a highly precise and ticklish job that must be done to a very exacting standard so that the strings’ “action”, their height above the fingerboard, is as near to the frets as possible without any fretted string contacting and buzzing on frets further up the neck.  If the action is too high, playing up the neck becomes difficult; too low and strings will buzz. 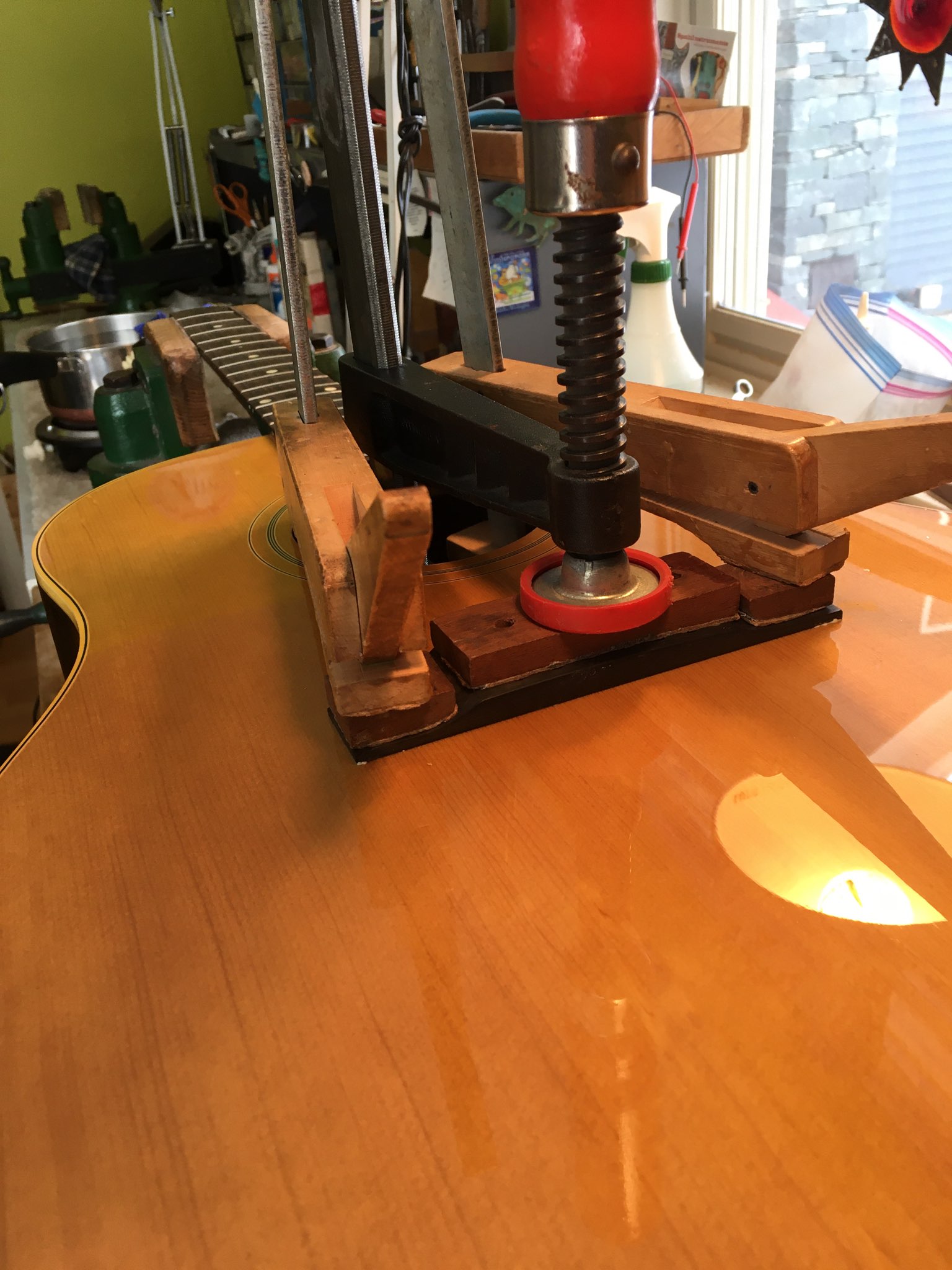 Gluing down the new bridge.  Clearly, Cat is SERIOUS about making sure the bridge stays put! 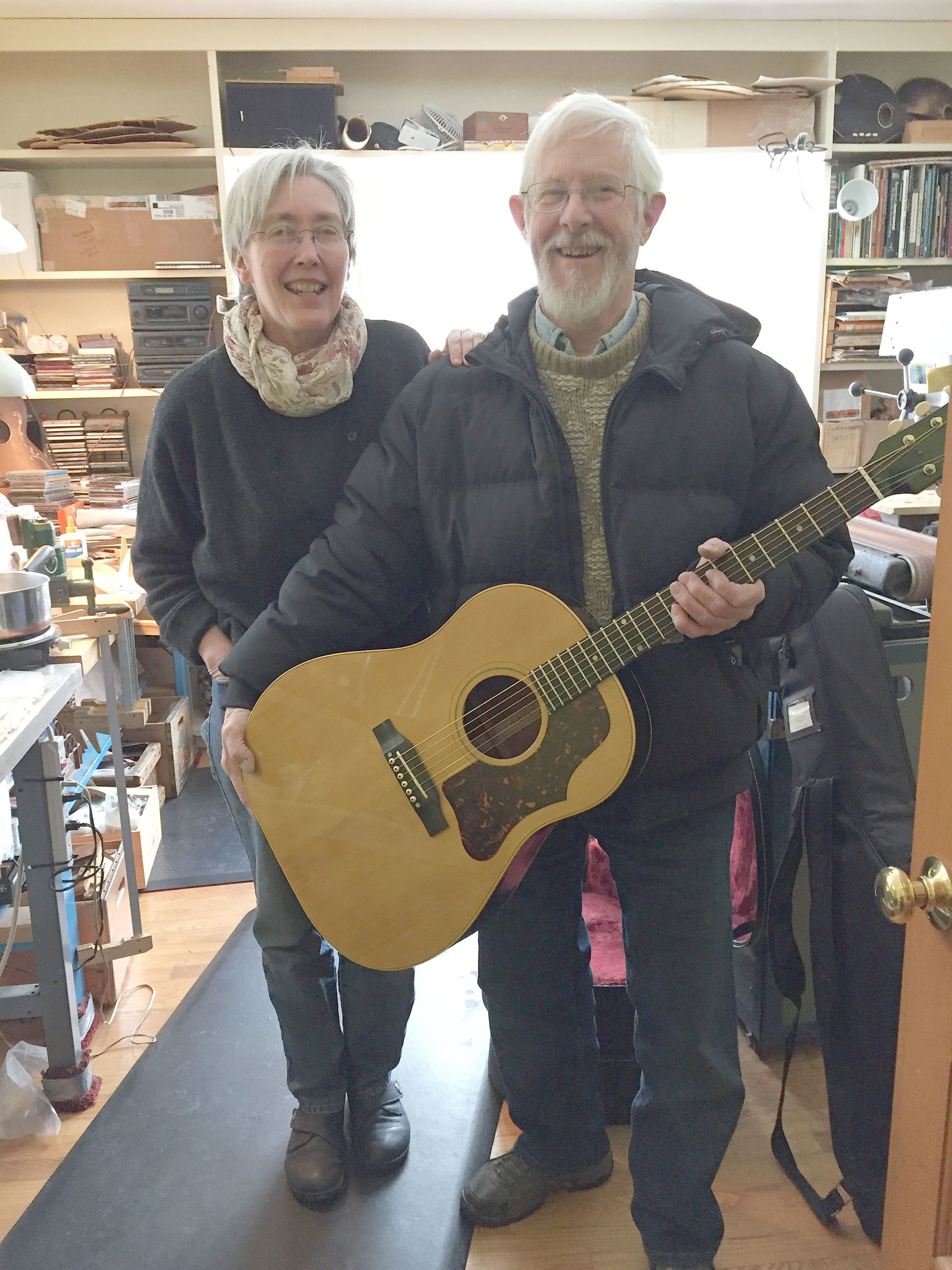 It’s DONE!  Here I am receiving it back from the incomparable luthier, Cat Fox.  I’ve now had a little time to sit and play it and I’m so happy to report that it’s sound it even better that I remember it of old, and even that was quite exceptional.  And it should only improve with being ‘played-in’.

So I can only express my unqualified recommendation of Cat at Sound Guitar Repair for anyone needing a guitar worked on.